Dialogue speeds the action up. This is the action of the story as your main character tries to solve whatever problem is 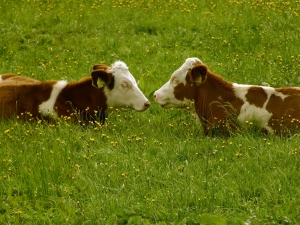 the driving force of your plot. If the action is tense, make the dialogue short and abrupt, snappy. Dialogue increases a book’s readability because of all the white space it puts in a book and well, people like to read what the characters are saying rather than being lectured to by the author in narrative. I know, it’s not lecture, but it feels that way to readers, so the more you can do in scene, in dialogue, the better. There is, of course, an upper limit on that, but I’ll talk about that another day.

Dialogue also lets the reader get to know your characters better than any other part of a novel. You get to hear how they express themselves, their choices of words, watch their body language. It’s almost like you the reader is there, talking it over with your new best friend. Since I’ve mentioned body language, don’t forget to add those details. If your character is angry as she’s talking, let us know she’s frowning, or her eyes are slits, or she can’t stand still. We can’t see her, so you as the author must be our eyes.

As a side note, don’t fall into the trap of feeling you must restate every bit of what a normal conversation would be:

Where are you going?

To the library. Something on your mind?

Skip all that. Just get to the point:

Narration slows action down, but provides important backstory, clues about the character’s growth since the story started, details about characters/scene/plot that can’t come out in dialogue, allows the POV character to bring secondary characters in on what happened during the action scene and/or allows time to pass. For example if the action scene involved a phone call that conveys devastating news to your main character, something that lets her/him know whatever solution she had thought would resolve her problem, didn’t work, you might need to give her/him time to adjust or you might need time to pass before the next action scene can occur:

After hanging up the phone, I ate a solitary late-night snack, did some reading, climbed into bed and eventually got some sleep

It gives the reader a breather from the fast pace.

Some experts (i.e., the acclaimed New York literary agent Evan Marshall) say you should have a ‘reaction’ scene (which tends to be narrative, introspective, interior monologue) after every ‘action’ scene (which tends to include a lot of dialogue).Usually, the action scene ends in failure for the main character because that’s what drives the story forward. She recognizes the failure and comes up with a solution to fix it, which will end up the next action scene.

That approach works well for me. It forces me to explain the implications of whatever just happened in the plot and thus, make sure the reader understands.

In the end, keep your narrative and dialogue in balance. No one wants to sprint from start to finish in a novel, nor plod through molasses to find out how the crisis is resolved. Pace your writing, just as you pace your life. A little excitement. Take a break, maybe a nap, then get into it again.

I have to admit, it’s a struggle for me to do what I’ve just said. I often find when I edit that I’ve put into narrative what should have been in dialogue, and vice versa. What do you think? And how do you make sure you avoid those pitfalls?

8 thoughts on “Dialoge Vs. Narrative: A Primer”

Jacqui Murray is the author of the popular Building a Midshipman, the story of her daughter’s journey from high school to United States Naval Academy, the Man vs. Nature saga, prehistoric fiction, and Rowe-Delamagente thrillers. She is also the author/editor of over a hundred books on tech into education, adjunct professor of technology in education, blog webmaster, an Amazon Vine Voice, and a freelance tech ed journalist. Look for her next prehistoric fiction, Natural Selection, Spring 2022.

What to Know Before Studying in the UK