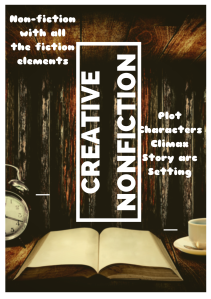 The words “creative” and “nonﬁction” describe the form. The word “creative” refers to the use of literary craft, the techniques ﬁction writers, playwrights, and poets employ to present nonﬁction—factually accurate prose about real people and events—in a compelling, vivid, dramatic manner. The goal is to make nonﬁction stories read like ﬁction so that your readers are as enthralled by fact as they are by fantasy.

To write creative nonfiction, you take the facts and tell them accurately, but add ‘educated guesses’ and logical extrapolation as to what the dialogue would have been (who really was there when Washington crossed the Delaware), setting (if you’re writing about a man lost in the Alaskan wilderness, that area arguably has not evolved since your character survived there), drama of the situation (those details are lost to history, but can be guessed at as long as they’re based on fact). Think of Steven Pressfield’s Gates of Fire. Killer Angels--both classified as fiction, but  you feel like you learned a lot about history from them. I have no doubt both authors worked tirelessly to make the history accurate as they fictionalized the characters, setting, and story arc details.

I doubt either book would have sold as many copies if they had been released as ‘creative nonfiction’ rather than ‘historic fiction’. I’m guessing, based on the fact that there are few best sellers in the creative nonfiction genre.

Read these snippets from reviews on Bill O’Reilly’s Killing Lincoln, a historic recounting of the death of one of America’s greatest presidents:

Killing Lincoln is a must read historical thriller

This genre teaches history with a spoonful of sugar.

Does this approach sound familiar? Have you checked your child’s classroom lately? The curriculum may sound similar to what you learned, but the delivery is more and more often done via carefully-selected games that teach the topic. It’s called the ‘gamification of education’ and is intended to keep students in school, graduate a greater percentage, and enable them to remember what they’ve learned long enough to use it in college and career. Studies prove students pay more attention, work harder, and retain material better via games than the traditional ‘sage on the stage’ approach. 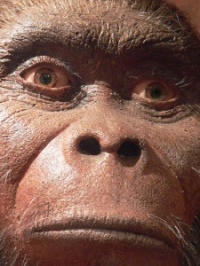 Here’s my challenge: I’m writing a series based on man’s evolution over the past 2 million years. I want to share the uniquely human characteristics–problem solving, visualizing, decorating our bodies, belief in a higher being–allowed us to survive a world that was stacked against us. Obviously, there are no records to draw on other than paleo topics related to climate, geology, anthropology. This means much of what I posit is an extrapolation of fact. Let me ask you: Does that make my saga ‘creative nonfiction’ or ‘historic fiction’?

Before you decide, check out these tips for those who write in this genre:

Now that you’ve seen these tips, is my story historic fiction or creative nonfiction?