Lucy: the Beginnings of Humankind

View all my reviews

I read this book as research for a paleo-historic drama I’m writing on the life of earliest man. My characters are Homo habilines (the earliest species of our own genus, Homo), but they cohabited Africa with Australopithecines (the genus that immediately preceded Homo and considered to be our forbears), of which the inimitable Lucy is by far the most famous. Unlike today where we–Homo sapiens sapiens–share the planet with no other Homo species, these two early iterations of man lived within hunting distance of each other and often collided in their daily efforts to survive the treacherous environs they called home.

To understand the co-stars of my story, I turned to the man considered by many as the guru of earliest man: Donald Johanson, and his amazing paleoanthropologic find, Lucy.

In his book, Lucy: The Beginnings of Humankind (Touchstone Simon & Schuster 1990), Johanson and co-author Maitland Edey tell the fascinating tale of how they found Lucy, the most complete skeleton ever uncovered of an Australopithecene (the genus that immediately precedes Homo in the timeline).

Prior to this find, Johanson was merely one of many paleoanthropologists in search of man’s roots, maybe the misunderstood ‘missing link’ (most scientists today believe the gradual evolution of our species means there is no euphemistic ‘missing link’, just a steady change of our physiology in response to environmental factors). Johanson got an idea, followed it despite adversity, disbelievers, money problems and set-backs.

These, he chronicles in the book, sharing every step of his journey with an easy-going writing style, breaking down the complicated science to an amateur’s understanding and sharing his innermost thoughts on his discovery and how it changed then-current thinking on man’s evolution.

I learned not only about Lucy, but how paleoanthropologists do their field work, what their days are like…

…how they fight to prepare for an expedition, and the politics they must solve both to get there and get back. Johanson also includes well-written descriptions on the background of human evolution, field work in East Africa, the paleo-historic geology of Olduvai Gorge (the famed location where Leakey uncovered so much of our primeval roots), the discussion among scientists that pinned down the human-ness of the genus Homo and what differentiated it from older genus like Australopithecines (Lucy’s genus), other animals Lucy likely lived with and survived despite of…

…how Lucy’s age was definitively dated, and more.

Johanson jumps right in with the Prologue, telling us how Lucy came to be discovered, and then takes us back to the story of how he got there and what happened after. Through Lucy’s story, we learn about man’s beginnings and who this earliest forebear was. Here are some of my favorite quotes: 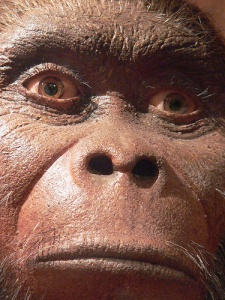 For some truly beautiful and realistic drawings of man’s predecessors, check out Jay Matternes.

Jacqui Murray is the author of dozens of books (on technology in education) as well as the popular Building a Midshipman, the story of her daughter’s journey from high school to United States Naval Academy. She is webmaster for six blogs, an Amazon Vine Voice book reviewer, a columnist for Examiner.com and TeachHUB, Editorial Review Board member for Journal for Computing Teachers, monthly contributor to Today’s Author and a freelance journalist on tech ed topics. In her free time, she is  editor of technology training books for how to integrate technology in education. Currently, she’s editing a techno-thriller that should be out to publishers next summer.

What are the popular file extensions kids should learn about?