My writing PLN (professional Learning Network) pretty much revolves around blogs and the authors who share their insights and advice through the online blogs. When I have a question, I often go there first, before digging through my shelves of self-help writing books. Along the way, I’ve read many of their books. Here, I want to share those that I’ve particularly enjoy and think you might too.

Jennifer Kelland’s Calmer Girls (Take the Plunge Publishing 2016) is a wonderfully constructed story about two sisters who are polar opposites except for the boy they both have fallen for. When their mother and father separate, they must move away from Calmer Cove to a new area with new friends and new challenges. They’ve always engaged in raucous sibling rivalry, but both falling for the same boy doesn’t help at all. This wonderful YA book touches on all those topics so important to this age group. I’d recommend it for parents looking for a G-rated story that will grab their child’s attention while helping them understand important issues.

One more item that makes this story unique: this glorious poem in Chapter One:

“For the wind was on her quarter, and the engines working free

There’s not another whaler, that sails the Arctic Sea

Can beat the Old Polina, you need not try me sons

For we challenged all, both great and small, from Dundee to St. John’s.”

I thought of this poem often as I read this story.

We meet Esther Crooke, the heroine of Dianne Gray’s Wolf Pear (Amazon Digital Services 2011) as she is burying a dead body in her backyard. As she finishes, her family arrives for a short visit and spends most of the time berating her for being overweight and single. This despite Esther’s success at starting and running her own bakery. We quickly find out Esther is part of a very odd family.

“He promised to return it [something Esther’s father borrowed] and must have driven by that afternoon and thrown it out of the car window on his way past because he couldn’t be bothered stopping. He always did things like that.”

Her sister allows her baby to fountain urine into the air while she’s changing him–and thinks it’s cute. Her mother tries to match-make Esther wth an ex-con by inviting him to breakfast at Esther’s house:

“Danny Thurlong scratched at his egg-shaped head. His hair was cut short at the top and stringy…  Danny agreed as a piece of toast flicked from his mouth back onto his plate.”

I cheered when Esther rejected Danny:

“‘It’s been nice meeting you, but it’s time to leave and please don’t come back.’ His mouth hung open like a cave. ‘But, I fought…’ ‘Don’t think. Just leave.’”

Luckily, she does get relief from this odious family while working, though the dead body buried in her garden continues to haunt her.

But Esther isn’t the whole story. There’s JD, the troubled policemen taking a compassionate leave in an effort to make peace with the murder of his brother. JD, who can’t stand human touch but can talk to dead people, voices that seek him out, begging him to bring justice to their murderers. Despite being on vacation from work, he quickly realizes that the man who killed his brother is a serial killer and it’s up to JD to stop him.

Both JD and Esther are appealing multidimensional characters. They have guts and humility despite their inter-personal problems.  Besides creative plotting and strong story-telling skills, what sets Gray’s writing apart is her rich descriptions, like few I’ve read:

“Mossy rocks and bird-catching spider-webs marred his path. Parrots exploded from the trees like green and red fireworks. The only narrow corner he could find wasn’t as narrow as he expected. It was deep and traversed by a dirt road used by anglers to launch small dinghies.”

“…trees like tired soldiers tranquilly watched him pass without a breath of wind.”

Highly recommended for those who like understanding the people behind the story. 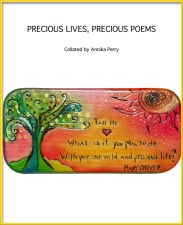 This is an amazing free ebook (available on her blog) of the favorite poems of Annika’s eclectic community of readers on her blog, ***. Her blog’s reach spans the globe so this collection is an insight into what poems are beloved by readers across the planet. She includes the poem, citation, short summary, and linkback to who recommended it. Some of my favorites include a sonnet by William Shakespeare, Desiderata, Invictus, Ode to a Grecian Urn (I completely forgot about this wonderful poem).

Harper Swan’s The Replacement Chronicles (Amazon Digital Services 2016) is a delightful story of Raven and her journey through late Pleistocene Middle East. Her tribe rejects her after the death of her husband and she must join her sister in her husband Bear’s tribe. When they capture a Neanderthal hunter, he is injured and she heals him until he is strong enough to return to his tribe. She is oddly drawn to him and they mate after he is released, but she refuses to go with him to his homeland. When she becomes pregnant she doesn’t know if it’s the Neanderthal child or another tribal man she has been forced to mate with.

This story parallels another about a modern day man with a passion for all things Neanderthal. When he must go to the Middle East to retrieve his Uncle’s ashes for burial, he visits several Neanderthal caves. At one of them, he is kidnapped and ransomed, surviving the ordeal in part because of his affinity for his powerful forebears. The blending of these two stories, with their focus on two people, separated by the eons, attempting to make a life for themselves, has an especially satisfying ending you won’t want to miss.

Overall, this is a fascinating peek into a life man has left behind. I know a lot about Neanderthals but Swan has posited a few ideas I hadn’t considered (for example, they inbred, they were more passive than Homo sapiens) and kick around in my brain, even now, weeks after I’ve finished the book.
..
View all my reviews

, the story of her daughter’s journey from high school to United States Naval Academy, and the thriller, To Hunt a Sub. She is also the author/editor of over a hundred books on integrating tech into education, adjunct professor of technology in education, webmaster for four blogs, an Amazon Vine Voice book reviewer,  a columnist for TeachHUB, monthly contributor to Today’s Author and a freelance journalist on tech ed topics. You can find her books at her publisher’s website, Structured Learning. The sequel to To Hunt a Sub, Twenty-four Days, is scheduled for Summer, 2017. Click to follow its progress.

40 thoughts on “4 Reviews by Blogging Authors”

Jacqui Murray is the author of the popular Building a Midshipman, the story of her daughter’s journey from high school to United States Naval Academy, the Man vs. Nature saga, prehistoric fiction, and Rowe-Delamagente thrillers. She is also the author/editor of over a hundred books on tech into education, adjunct professor of technology in education, blog webmaster, an Amazon Vine Voice, and a freelance tech ed journalist. Look for her next prehistoric fiction, Natural Selection, Spring 2022.

What to Know Before Studying in the UK