A to Z Challenge asks bloggers to post every day except Sundays during the month of April on a thematic topic–nothing else. This year, I’ll be covering writing genres. 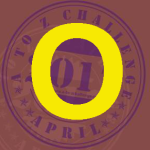 dealing with witchcraft, spiritualism, psychic phenomena, voodooism, etc., and for works dealing with the mysterious or secret knowledge and power supposedly attainable only through these and other magical or supernatural means]

I am stuck on this one. Any tips from you-all on how to write occult fiction?

, the story of her daughter’s journey from high school to United States Naval Academy, and the thriller, To Hunt a Sub. She is also the author/editor of over a hundred books on integrating tech into education, adjunct professor of technology in education, webmaster for four blogs, an Amazon Vine Voice book reviewer,  a columnist for TeachHUB, monthly contributor to Today’s Author and a freelance journalist on tech ed topics. You can find her books at her publisher’s website, Structured Learning. The sequel to To Hunt a Sub, Twenty-four Days, is scheduled for May 2017. Click to follow its progress.