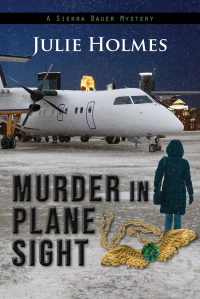 I am so excited to host Julie Holmes and her debut novel, Murder in Plane Sight. Julie has been writing since elementary school and been published in small press magazines such as “Fighting Chance” and “The Galactic Citizen”. She lives in south-central Minnesota on a small hobby farm with her husband, their two college-aged children, one cat, two dogs, three chickens, and an abundance of chipmunks, squirrels, and rabbits. When she isn’t writing, she likes to read, go for walks, or tend her vegetable garden. I’m happy to hear that she is working on the next Sierra Bauer mystery.

Today, Julie is sharing thoughts on “write what you know” and for Julie, that is aircraft mechanics–perfect for her new book:

Hi Jacqui! Thank you so much for helping me spread the word about my debut novel. High five for book release blog tours!

As writers, one of the favorite pieces of advice is “write what you know”. I always thought it was more fun to do research and write what I learned instead. I mean, no one wants to hear about the day in, day out of an IT professional who deals with everything from broken printers to basic programming. And technical writing isn’t a whiz-bang job either.

There was something, though, in my pre-IT days that seemed to interest people. Aviation maintenance is a part of the industry few get to see close up, and even fewer of those are women. Most books with an aviation component are either military-flavored thrillers, or have protagonists who are pilots or airport managers or aircraft inspectors, with flight attendants tossed in for good measure. And more men star in those roles than women.

I wanted to do something different. I needed to write a story about an aircraft mechanic, or these days, aviation maintenance technician. It’s what I know. It’s the world in which I made a living for a handful of years.

It’s the type of story I want to read. So I wrote it. Hey, I knew those years swinging a wrench were good for something besides the oh-so-enjoyable shock factor. There’s nothing quite like the look on someone’s face when you tell them you work on airplanes. Especially when you are a woman.

These days women in aviation maintenance are not the rarity they once were, but as much as we like to tell ourselves differently, there are still occupations seen as male-dominated and aviation is one of them.

It’s not the occupation, though, that matters. It’s the characters that truly matter. Sierra Bauer is a strong, confident woman working in a man’s world, with her own scars to bear. Quinn Moore is no slouch either, despite the losses in his own past. Together they make a great team.

Murder in Plane Sight is available at Amazon and Barnes and Noble and wherever books are sold.

Sierra Bauer is nobody’s fool—a skilled and confident aircraft mechanic, a woman operating in a man’s world. But her world is about to be turned upside down, and her confidence challenged.

After her stalker was sent to prison, and she was cleared of wrongdoing by the FAA in her brother’s fatal plane crash, Sierra has finally reclaimed her life. But in the dead of winter at the Minneapolis-St. Paul Airport, she makes a gruesome discovery—a woman’s frozen body hidden inside the maintenance bay of a Range Airlines plane Sierra was inspecting. Her life is pitched into a tailspin.

Enter Detective Quinn Moore of the Airport Police Department, who finds himself attracted to Sierra despite mounting evidence forcing him to consider her the prime suspect.

Sierra’s stalker may be back, and someone is trying to frame her for the murder. The woman Sierra blames for her brother’s death may hold the key to uncovering a conspiracy that threatens the entire aviation industry. She and Quinn must expose the truth before Sierra becomes the next casualty.

I am going to review Julie’s book on a future post–not quite finished yet with her story–but my early thoughts:

Reading this story is as disappointing as, say, winning the lottery. You know what I mean?

You can reach Julie at any of these social media locations:

, the story of her daughter’s journey from high school to United States Naval Academy, the Rowe-Delamagente thrillers, and the Man vs. Nature saga. She is also the author/editor of over a hundred books on integrating tech into education, adjunct professor of technology in education, an Amazon Vine Voice,  and a columnist for NEA Today and TeachHUB. Look for her next prehistoric fiction, Quest for Home, Fall 2019. You can find her tech ed books at her publisher’s website, Structured Learning

90 thoughts on “Meet Julie Holmes and her Debut Novel”