A good efriend, Liz Gaudet, mentioned in a comment that she enjoyed the snippets writers share from their own writing. It reminded me I pretty much never do that. And she’s right–if people don’t know what my writing is like, why would they risk the time to read the novel?

So, I’m going to share a snippet from each of my novels over the next few months. I hope you enjoy!

To Hunt a Sub

An unlikely team is America’s only chance

A brilliant Ph.D. candidate, a cynical ex-SEAL, and a quirky experimental bot team up against terrorists intent on stealing America’s most powerful nuclear weapon, the Trident submarine. 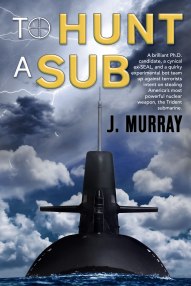 Ten hours and thirty-seven more minutes and the crew of the USS Hampton SSN 767 would be home. Seasoned submariners, the six-month covert intelligence-surveillance-reconnaissance tour down the eastern seaboard of South America had gone flawlessly and silently. The Atlantic is a large ocean and the Los Angeles-class sub’s noise footprint small. Once the boat cleared Cuba, the crew would relax.

The Captain sipped the morning’s fourth cup of burned coffee when the hair on the back of his neck prickled. He glanced around, trying to identify what bothered him.

“Captain,” the Watchstander’s gaze bobbed from the Executive Officer to his watchstation. “Navigation is non-responsive.” Confusion tinged his words.

That was it. A change in the deck’s subtle rumble. Before the Captain could react to the impossibility that guidance controls had crashed, every monitor in the sub’s nerve center shut down.

He hadn’t seen this in twenty years of driving subs. All personnel made a hole as he rushed toward the Control Center, shadowed by the XO.

“Sonar readings?” The Captain called to Sonarman Second Class Andy Rikes in the compartment just aft of Control, barely larger than a broom closet but elbow-to-elbow with operators, fingers flying across keyboards and eyes locked onto screens that blinked a dull grey.

Rikes answered, “Negative, Sir. The hydrophones are working, but aren’t sending raw data, like someone pulled the plug and flushed everything out to sea. Trying to fix it.” His voice was hopeful.

If the screen had worked, Sonarman Rikes would have seen the ping, a final gasp before everything electrical collapsed.

The COB—Chief of Boat—interrupted, “Captain. Reactor Scram!” The sub’s nuclear power had evaporated. “Nuclear technicians isolating the problem. Battery back-up is being attempted.”

“Shift propulsion from main engines to EPM,” an auxiliary electric motor that could turn the propeller.

The depth meter no longer worked, but the XO guessed that the sub was angled downward at 10 degrees

“How deep is the ocean floor in this sector of the Atlantic?”

“There are seamounts and ridges spread throughout. We could get lucky and land on one. Or not.”

“Inform US Strategic Command of our situation.”

“Release the message buoy,” though all that told the world was they were in trouble. It could quickly drift miles from their position.

The Captain continued, voice calm, face showing none of the worry that filled his thoughts, “I want all department heads and Chief Petty Officers in front of me in five minutes. I want the status on every system they own and operate. Wake up whoever you need to.” He had a bad feeling about this.

“Gentlemen, solutions.” The Captain looked first at XO, then COB and finally NAV, the Navigation Officer who turned to the senior chief of navigation.

“It’s like an electromagnetic pulse hit us, which can’t happen underwater…” then he shrugged as though to say, I have no idea, Sir.

They practiced drills for every sort of emergency, but not this one. No one considered a complete electrical shutdown possible.

“We’re checking everything, but nothing is wrong. It just won’t work.”

“Where’s CHENG?” The Chief of Engineering.

No one knew who their enemy was or why they were under attack, but they had one and they were.

“XO, get lanterns up here.”

Within an hour, the massive warship had settled to the ocean floor like the carcass of a dead whale. It teetered atop an ocean ridge, listing starboard against a jagged seamount, and the gentle push of an underwater current from a cliff that plunged into a murky darkness. Every watertight door was closed. As per protocol, the oxygen level was reduced to suppress a fire hazard. Without climate controls, the interior had already reached 60 degrees. It would continue dipping as it strove to match the bone-chilling surrounding water temperature.  Hypothermia would soon be a problem. For now, though, they were alive.

The hull groaned as though twisted by a giant squid.

The Captain peered into the gloomy waters that surrounded the sub. “Thoughts, XO?”

“We’re stable for the moment, barring a strong underwater current.”

Based on the creaking protests from the hull, they were at or beyond crush depth. Any deeper, the outside pressure would snap the HY-80 outer hull and sea water would roar into the living compartments. Everyone would be dead in seconds, either drowned or impaled on the ragged remains of the sub by a force in excess of a Category Five hurricane.

“We’re beyond the depth of the Steinke Hoods,” escape equipment that included full body suits, thermal protection, and a life raft. Budget cuts had eliminated funding for more advanced solutions.

XO pointed toward a darker expanse of black just yards from the sub. “No telling how deep that crevice is.”

“Gather the crew in the Forward compartment. Seal all other compartments. Ration water. Start O2 candles when levels reach 50% normal. Did the message buoy launch?”

That was a relief. The Deep Submergence Rescue Vehicle (DSRV) deployed in emergencies from shore couldn’t assist if it didn’t know they needed help.

Available on Amazon, print or digital and on KU

, the story of her daughter’s journey from high school to United States Naval Academy, the Man vs. Nature saga, and the Rowe-Delamagente thrillers. She is also the author/editor of over a hundred books on integrating tech into education, adjunct professor of technology in education, blog webmaster, an Amazon Vine Voice,  a columnist for NEA Today, and a freelance journalist on tech ed topics. Look for her next prehistoric fiction, Laws of Nature, Summer 2021.

68 thoughts on “Excerpt from To Hunt a Sub”